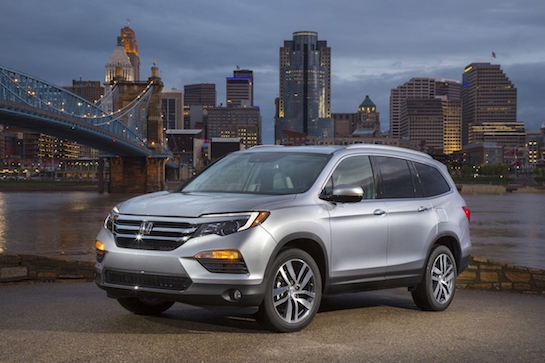 Honda has recently been upgrading the infotainment systems of its models in the United States and the latest to receive the update is the 2017 Honda Pilot.

The vehicle now gets the addition of Apple CarPlay and Android Auto in addition to infotainment system. Most recent vehicles have started adopting these two technologies and it is not surprising that the 2017 Honda Pilot offers this element considering that it has already featured in a number of Honda products. The 2017 Honda Pilot is not different in terms of design as it looks exactly similar to the current generation.

Buyers will have to pay out a small increase of around $300 for the addition of Android Auto and Apple CarPlay. It is not known whether the car supports wireless Apple CarPlay. These two features are available on all trim levels apart from the base version, which comes with a 5 inch display. The higher trim levels – starting from the EX onwards – receive an 8-inch infotainment system which now comes with an additional coding to eliminate fingerprints. The touchscreen has received widespread criticism for being a fingerprint magnet.

However, Honda continues to avoid the volume control knob as an option. The volume control slider, which has been seen as one of the frustrating elements of the infotainment system, continues to have its place in the center. The 2017 Honda Pilot will be available in four different trim levels starting from the LX variant which is available for $31,475. Prices for the EX variant, which marks the beginning of the Apple CarPlay and Android Auto features, comes in at $33,910.

The EX-L variant marks a huge jump to $37,335 while an equal amount of increase is seen with the Touring model at $42,550. The top of the range Elite comes in at $47,950. Buyers have the option to spec their cars with all-wheel drive functionality for an additional $1800, but this ability is available only variants from above the EX-L. The top of the range Elite and Touring models come standard with the Honda Sensing package. This package adds a lot of safety features to the vehicle, but it is a $1000 option on the lower end models like the EX and EX-L.

It is also possible to add a rear seat entertainment package for $1600 on the EX-L variant.

The 2017 Honda Pilot will be available in showrooms starting from November 7.

Rob Wiethoff, the actor who lends his voice to the popular character John Marston in Red Dead Redemption, recently addressed...

Pokemon is one gaming franchise that enjoys tremendous popularity among those who don’t play games regularly. The franchise has been...

The Sims 4: New Update Eliminates Several Bugs From The Game

Ever since the first sequel in The Sims franchise came out, updates have been rolled out for every franchise in...

Vivo V25 Pro smartphone with model number V2158 has appeared on the Geekbench benchmarking website. The listing confirms the presence...